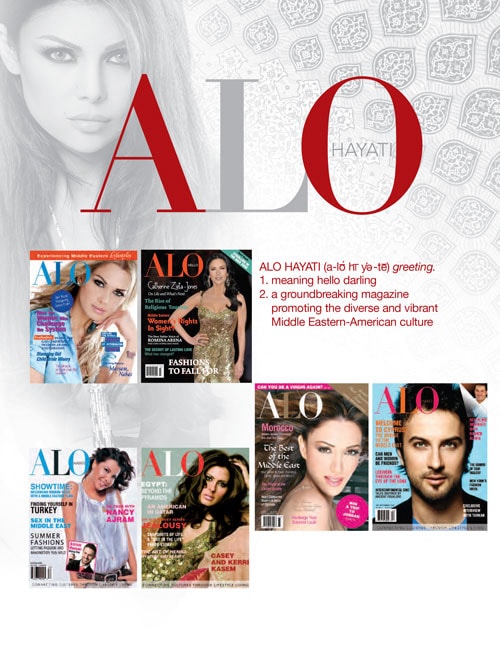 “ALO HAYATI represents what the world need at large is missing: A positive voice for most of us who strive for greatness, peace and prosperity. ALO understands our unique ways like no other and remains the definitive culture and lifestyle magazine for middle eastern-american.”
–– Princess Sumaya bint El Hassan of Jordan

ALO Hayati as ALO Magazine is the world’s premier Middle Eastern cultural and lifestyle magazine. It is the creation of Lebanese poet, entrepreneur and humanitarian Wafa Kanan, who came to the United States in 1990. The magazine was launched in April 2005, and just three years later it has a readership of more than 1.2 million.

ALO Hayati’s editor–in–chief Michael Lloyd left his post as marketing director for a Fortune 1000 firm and joined Kanan to both assist with the development of Unique Image, and in 2004, to plan the magazine’s launch. Their goal was to shatter misconceptions about Middle Eastern culture by focusing on the rich, dynamic lives of people who live and/or come from the some 25 countries that comprise the Middle East, North Africa and the Mediterranean. ALO Hayati seeks to educate a worldwide audience about both the Traditional Heritage and contemporary lifestyle in these diverse regions. The magazine is dedicated to journalistic integrity, thoughtful reporting and excellent design. ALO’s mission is to provide a powerful and informative media network between its readers and all the countries in these regions. Their ultimate goal is to enlighten and foster the reader’s passion for the innumerable facets of the rich and beautiful Middle Eastern, North African and Mediterranean cultures.

ALO Hayati’s fashion, travel and lifestyle articles take readers inside the lives of this region’s peoples, and so provide a window into some of the most misunderstood ethnic communities today. The magazine has published exclusive intimate profiles of top leaders in the region including HH Sheikh Mohammed Bin Rashid Al Maktoum the Vice President and Prime Minister and Ruler of Dubai, Former first Lady of Egypt Madame Sadat and exclusive interviews with the likes of Queen Noor and Princess Sumaya of Jordan.

“Alo, hayati” is a common Arabic expression of affection. Literally “Hello, my darling.” The phrase is shared between parents and children, spouses, lovers and friends alike. It expresses the open-ended, positive mission of the magazine. ALO Hayati is not beholden to any religious or political viewpoint, and so has the freedom to address fascinating and sometimes controversial topics with candor and openness. Insightful editorials and feature articles have dealt with such subjects as the growing interest in business opportunities, and Middle Eastern cultural trends by Americans (“Destination Middle East”), intercultural marriage (“Shocking Intercultural Stories”), woman’s rights (“The Truth behind the Veil”), racial discrimination (“Why I changed my name from Mohammed to Mike”), Gay & Lesbian relationships (“ Coming out”), and the growing design craze for Middle Eastern and North African art (“All of your home design” and “ The Genius of Sam Maloof”). The goal of these articles is not to be provocative, but to encourage frank and open dialogue and enhance greater cultural understanding.

Film, television, travel, cuisine, health and fitness tips—all topics one expects to read about in a lifestyle magazine—also fill the pages of ALO Hayati. The focus remains on the Middle East, North Africa and the Mediterranean, but the target audience extends to the worldwide audiences of all cultures and the Diasporas of this region’s people living around the world. ALO Hayati also provides its readers with a bridge to American culture, which is also frequently misunderstood in the Middle East and North Africa.